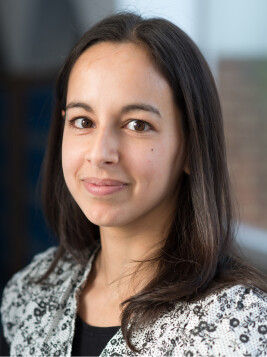 Hi Hester! Would you mind briefly introducing yourself and your research for our readers?

I'm a Senior Lecturer in History at the University of Sussex. My first book was The 1926 Miners' Lockout. Meanings of Community in the Durham Coalfield (OUP, 2010). I have published extensively on the history of childhood and education in modern Britain and I am currently completing a monograph to be published by MUP, Classroom and Community: Elementary education in London, 1918-39.

Thank you! We're really interested in your involvement in the project. Could you give us a brief overview of your work on Speaking Citizens?

My work engages with the politics of speech education in British state school classrooms between the wars. I am looking at the institutional and pedagogic way that oracy is framed in this period, and how it relates to citizenship: after all, these were years when debates about citizenship became particularly important, between the mass mobilisations of the two world wars and with the advent of universal suffrage. But I also want to think beyond the official narratives, to the lived experience of the classroom and how children and their families experienced ‘speech training’. I don’t just want to find out what was being told to children in classrooms, which was often laden with assumptions and prejudices: I also want to know how those children responded.

Fascinating! It's clear that 'oracy' is central to your research questions. How do you approach this concept in your own research?

The term ‘oracy’ wasn’t used in the 1920s and ‘30s. Instead, educationalists talked about ‘speech training’. F. H. Spencer, who was London’s Chief Inspector of Schools in the 1930s, suggested that this should ‘not mean that we shall all speak “standard English”… even though to possess the Cockney accent is to suffer in many walks of life a grave economic disability.’ Rather, he continued, ‘the present defects in speech of our children are, first, that they dislike speaking aloud, and, second, that when they do they clip their words and speak into the linings of their waistcoats so that no one can hear them.’

But good speech meant different things to different people at different moments in time. Children’s own writing can help us to understand the experiences of particular cohorts. In 1937, a twelve-year-old working-class girl from Bolton wrote in a school essay that she had learnt not to use vulgar words, not to interrupt, and ‘to be ladylike and polite when I am asked a question.’ She also explained that it was her mother (not her teachers) who had drummed this into her.

One of my most important research questions is to think about the various ways that oracy was framed and the ways in which the different expectations of, say, parents and teachers were negotiated by children.

This is all very interesting! Which methods will you be using to explore these questions?

As a historian it’s much easier to examine official perspectives because of the availability of sources. Most historical sources are top-down: it’s relatively straightforward to find educationalists’ thoughts and writings or school inspectors’ reports. It’s harder, but not impossible, to find teachers’ comments. But it’s harder still to uncover the thoughts and reactions of ordinary people. Oral history and memoirs are one source; I’m also using the collections gathered by the social research Mass-Observation in the late 1930s which include children’s writing on various topics (such as the twelve-year-old from Bolton above). I’m still on the hunt for more…

It's clear that you have an interest in the social benefits of oracy skills, so I'm wondering if you have any thoughts on whether improving oracy skills could help us tackle social inequality?

History shows us that tackling social inequality isn’t just about correcting one thing – there are so many social and economic factors that affect it. But it also shows us that oracy can make a difference. Certainly middle-class educationalists in the interwar period thought so! They often referred to schools and school lessons as ‘civilising’ influences in working-class communities, and believed that teaching better speech, in all its forms, gave working-class children a better chance. They were also absolutely hidebound by the class assumptions of the time, and were often extremely derogatory about children’s families – any ‘civilising’, for example, they assumed must surely have to come from the school. The personal, local and more pragmatic actions of sympathetic teachers on the ground, when they could work in partnership with parents, were often more effective and appreciated.

And one final question, what are your research plans for the next six months?

I’m currently completing the manuscript for my book on the interwar classroom, due to be delivered to Manchester University Press in September. Most social and political histories of Britain pay scant attention to children’s experiences or the social history of schooling; most histories of British schooling have either focused on the late-nineteenth and early-twentieth century or the post-1944 period. In the book I am trying to put the two together to tell the history of interwar Britain through its classrooms.

The book includes a discussion of the way that speech and oracy are approached in the classroom: that’s where my original interest in the Speaking Citizens project came from and some of the ideas in the book inform my approach. However, the book focuses on London and my contribution to Speaking Citizens will be national – over the next few months, especially as archives start to reopen, I’m looking forward to engaging with sources from other areas, including Scotland, given the expertise on that country amongst other team members.